Now that it’s been nearly a month since the National Homebrew Conference, I figure I’m overdue for a quick wrap up post. 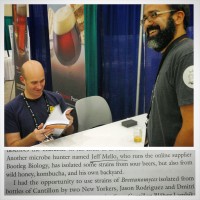 Check out the mention on page 63!

First I want to say thank you to everyone who came out to the Bootleg Brew Science seminar, or who stopped me during the conference just to chat or share a beer. I can’t think of a better experience than being around a bunch of homebrewers who love talking about yeast wrangling and who are excited about contributing their local yeast to the project.

Now here’s the quick rundown of events we participated in during the conference:

On Thursday afternoon, the first full day of the conference, one of our first stops was the Brewers Publications booth to pick up a brand new copy of Mike The Mad Fermentationist’s new book American Sour Beer. It was fun waiting in line with other sour beer nerds to have Mike personally sign my copy. I also attended Mike’s presentation on sour beer mashes, which definitely opened my eyes on ways I could improve my sour & funky brewing. 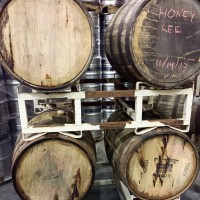 Thursday evening my wife and I were invited by John Stewart and the crew at Perrin Brewing to do a tasting of four different barrels fermenting Bootleg Biology cultures. It was such a blast to sample beers made by talented brewers experimenting with microbes from the project. Hopefully we’ll get a chance to sample the beers further down the road to see how they’ve changed and progressed over time. In the meantime, if you’re ever in the Grand Rapids area I suggest stopping by to check out the brewery.

Friday morning I presented Bootleg Brew Science. It was crazy seeing how many people attended, especially considering the fact that Stone Brewing’s Mitch Steele was speaking at the same time! 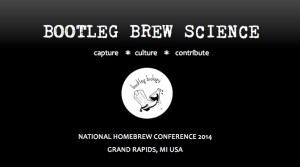 I don’t normally enjoy hearing myself speak, but it was really fun being up there! It was also quite an honor being introduced by a homebrew legend, Drew Beechum. There were a lot of great questions on yeast wrangling during the Q & A portion, and some questions about things I had never before considered. Just goes to show you that there is no limit to a homebrewer’s creativity and curiosity.

I hope that in the end the presentation was informative, a little entertaining, and also inspired those that attended to get out there and seize the yeast in their backyard…hopefully using a Backyard Yeast Wrangling Tool Kit!

If you weren’t able to attend, here are links to the presentation (5.6 MB PDF) and audio recording (must be an AHA member to listen). I’ve also put together a recipe for those who enjoyed Berliner Bear, or are interested in brewing a dark, quick sour (I probably missed some details, so feel free to contact me with any specific questions). 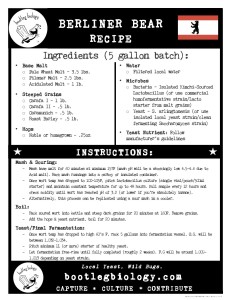 On Friday evening, Bootleg Biology represented with the GRiST homebrew club of Arlington during Club Night (thanks guys!). We served a special 100% Brett Hoppy Pale Ale (thanks to Bear Flavored’s article in the May/June issue of BYO for inspiration) fermented with Pithos #1 and overhopped with Centennial, Amarillo and Galaxy. Those who attended Bootleg Brew Science, and followed us on social media, got a free Training Loop & Agar Plate tchotchke. I’m interested in hearing what people have streaked with the plate. Let us know!

Of course I would be a jerk if I didn’t also thank Ben Laninga, Brent MacAloney, Pete Jones and Dan Bremer for their help and camaraderie during Club Night. Cheers fellas!

I just got back from a Yeast Odyssey in Colorado and have tons of microbes to work with. Right now is prime yeast capturing time (at least in the northern hemisphere), so get out there and be Bootleg!

This Saturday, July 12, I’ll be presenting a condensed version of Bootleg Brew Science at Little Harpeth Brewing for the 2nd Annual Middle TN Multiclub Homebrew Meeting. You should stop by if you’re in the Nashville area!