The early days of American wild and sour beer brewing were full of hearsay and guesswork, as Americans paid homage to centuries of European mixed culture brewing.

Out of that darkness came Jay Goodwin, Co-Founder and CEO of The Rare Barrel, whose show The Sour Hour interviewed the most talented and knowledgeable people in the industry.

Armed with heaps of knowledge and years of experience, The Rare Barrel continues to innovate in modern sour beer brewing. Bootleg is honored to release The Rare Barrel’s house culture on the masses.

This unique blend of Sacch, Brett and lactic acid bacteria cultures is lead by a classic bubblegum and clove Belgian saison strain and big tropical fruit and pineapple producing Brett culture. Acidity is reliably controlled by different levels of IBUs.

According to Cellar Manager Tommy Kim, The Rare Barrel’s main recipe for wort production has changed throughout the years and is rarely the same batch to batch. The recipe below is good representation of a classic Rare Barrel recipe. 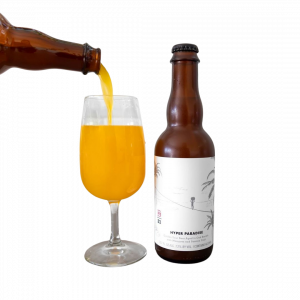 MALT
70% Base Malt (Weyermann Pilsner or Rahr Standard 2-Row)
12% Malted Wheat (Gambrinus or Rahr)
6% Spelt Malt (Weyermann)
6% Vienna (Weyermann)
6% Flaked Oats (Grain Millers)
HOPS
Based on hop variety preference. A small boil addition of a low-AA hop to inhibit bacteria
0-5 IBU range: Should acidify within the first two weeks of fermentation.
5-15 IBU range: Should acidify within a couple of months.
15-30 IBU range: May take as long as 3-6 months to fully acidify.
YEAST
The Rare Barrel Culture
Pitch between 68-70 F and let free rise to 72F. Once it reaches 40% attenuation, allow fermentation temperature to rise to 75F until reaching a stable gravity close to 1.5 Plato (1.006).
When used as a secondary culture after a Sacch primary fermentation, acidification typically occurs within 6 months.